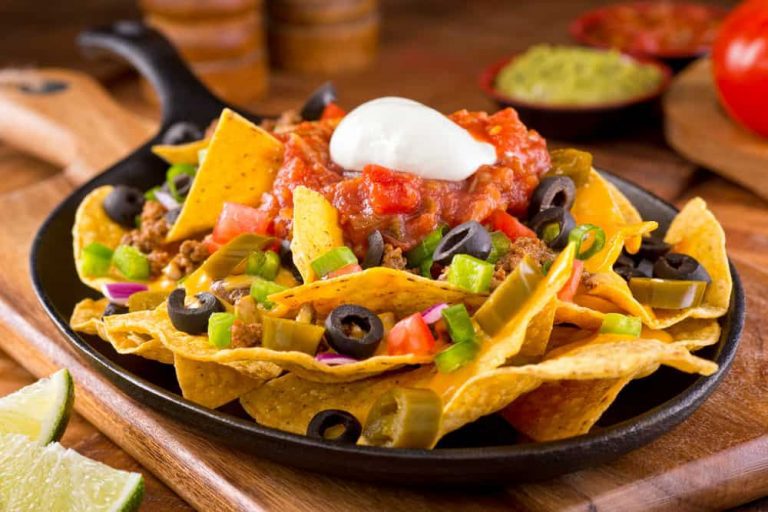 Other than nachos or noodles, thinking of foods that begin with the letter N may not be the easiest thing to do. That’s where this article comes in. Here is a list of some of the best foods we could think of that begin with “N” and where to find them.

Naan bread is the most popular bread product to come from India. It is a flatbread typically toasted and used for soaking up the sauces and spices common in Indian cuisine. It is also used instead of utensils for many dishes throughout India. Its delicate flavor and fragrant spices make it a perfect accompaniment to any meal in Indian cuisine. Naan bread is available worldwide in major supermarkets, but it is simple to make at home. Naan bread is also an excellent choice for pizza crusts, sandwiches, gyros, and burritos for those looking to experiment.

Nachos are one of the most popular bar foods in the United States and Mexico. These are deep-fried tortillas cut in bite-size chips, topped with salsa, melted cheese, and jalapenos. Nachos are a great snack and simple to make at home. Several variations and preferred toppings are options for all chefs who make it and enjoy it. Nachos are fantastic for parties of all kinds, as children and adults want nachos no matter what the occasion is, and are simple to make at home, making them an excellent food to prepare and serve.

Don’t let this pear’s shape fool you into thinking it’s an apple. Nashi pears are common across East Asian countries and are famous worldwide. The nashi pear has the same uses as its pear cousins. It is enjoyed fresh or as part of sauces, juices, or salads. Many dishes that call for a sweetener may use the nashi pear in the place of refined sugar, making it a healthier option for desserts and salad dressings. Nashi pears are available to purchase globally in the produce section of many supermarkets or farmer’s markets and are an excellent choice for fruit lovers.

Nasi goreng is Indonesian fried rice. It stands out from other fried rice variations due to kecap manis, a sweet soy sauce that gives the rice its darker color and sweeter taste. Nasi goreng’s typical ingredients are rice, chicken, onions, a fried egg per serving, and freshly chopped cucumbers and tomatoes. Variations of the recipe include adding a shrimp paste sauce, changing the chicken for a different protein, or adding chili peppers to add a spicy kick to the meal. Kecap Manis is simple to make at home with standard soy sauce or purchase at Asian supermarkets, making Nasi Goreng a simple meal to prepare anywhere in the world.

The natal plum is one of the most widely consumed fruits in South Africa. It’s difficult to transport to different nations because it perishes quickly and bruises easily, too. The natal plum’s flavor profile is a sweet and sour taste with a juicy consistency. As such, the plum appears in juices, jams, fruit salads, and fresh. The plant grows easily in the South African climate, so it is popular for local farmers, gardeners, and horticulturists. South Africa is a favored tourist nation, and the natal plum is a fantastic fruit to enjoy while visiting the country.

Among one of the most divisive foods of Japanese cuisine, natto is fermented soybeans commonly served over rice. Natto is found all over Japan and is a breakfast staple for Japanese citizens. The flavor and smell of natto are among the strongest in a cuisine otherwise known for its subtle flavors. The natural acid of the soybeans creates a sticky and stringy liquid that is slimy to the taste. Natto is considered an acquired taste and has as many detractors as it does fans. Natto is difficult to find outside Japan, but many Asian specialties markets may sell it.

One of the most common and enjoyed fruits worldwide, navel oranges are among the most popular variety of oranges. The navel orange earned its name from the navel-like shape at the top of the orange. The navel orange is also less juicy and has a more bitter flavor compared to standard orange variations. They’re an excellent choice for those looking for a different flavor profile from the usual orange. Navel oranges are common throughout the United States and are prevalent in Florida and California. Both states produce more oranges than all the other states in the country. The navel orange is also standard in other tropical nations and South America, making it one of the most accessible foods on this list.

Navettes are cookies from the Marseillais region of France. They are the signature dessert of the area. Their iconic boat shape makes them easy to identify, and their simple preparation makes them accessible to anyone willing to bake them. Making navettes is similar to making sugar cookies, but the orange blossom water added to the mix gives them their renowned flavor. Navette dough is rolled into tubes and cut with a line at the top to attain the famous boat shape. They’re fantastic alone but excellent with ice cream, fruits, whipped cream, and chocolate sauce.

The lifeblood of flowers and preferred food source of many insects, nectar is fantastic food in areas with large floral varieties. Nectar is a common ingredient in many dishes calling for sweetness. Nectar is harvested as a natural syrup or liquid sweetener, and nectar from different plants offers different flavor profiles. Most nectar is concentrated for hummingbird birdkeepers. That said, some nectars from fruit plants, such as agave and guava, are readily available in most supermarkets or farmer’s markets. Nectars are used in fruit juices, cocktails, desserts and replace refined sugars in many recipes.

The glossy-skinned sibling of the peach, nectarines are one of the world’s most popular fruits. Nectarines and peaches can trace their origins to China and East Asia. They have since been planted worldwide in favorable agricultural conditions. Nectarines are different from peaches because of their appearance and their thinner skin, making them easier to peel and prepare. Nectarines are enjoyed globally and are in the same recipes that call for peaches. They’re enjoyed fresh, as part of salads or desserts, and the juice they produce is perfect for cocktails, smoothies, or enjoyed alone.

Nesselrode pie is a classic dessert that enjoys a cult following in New York City. This dessert was popular in the 1940s and has since faded into obscurity. The recipe of Nesselrode pie remains today for all to enjoy. Its main ingredients are chestnuts, rum, and cream, and it features a filling made from fruits. Chefs can prepare the crust according to their preferences, but the use of chestnuts, rum, and cream makes this dessert popular. A cult following within New York prepares the pie, as this recipe was lost to time, but that doesn’t make it any less satisfying or straightforward to make and enjoy.

Nettles, or stinging nettles, are widespread all over the world. While many variations of nettles are poisonous, several species are safe for consumption. Nettles appear in many a recipe, including soups, salads, or vegetable components in meals. While nettles resemble cilantro in appearance, their flavor profile and usage are similar to spinach and may be substituted in recipes calling for spinach. You can find nettles in supermarkets and farmer’s markets that offer fresh produce.

Clam chowder is a favorite soup in the northeastern United States. What separates New England clam chowder from its Manhattan and Rhode Island counterparts is its clear white color, which comes from adding milk or cream into the recipe, and its heartier ingredients, such as potatoes and pork bits. This dish is perfect for the winter months as a hot soup to help warm up locals from and weary travelers to New England. With the simple ingredients needed to make this fantastic dish, it’s also possible to enjoy it at home, so long as chefs can acquire fresh clams.

The humble noodle can trace its history back to China. It is now one of the world’s most iconic and staple foods. Variations of noodles exist worldwide, including pasta from Italy, ramen and soba noodles from Japan, and China’s lo mein and chow mein noodles. Wheat or eggs are the traditional ingredients in making noodles, but many vegan options, such as spaghetti squash, exist. With so many regional and national dishes containing noodles and their widespread use in cuisines in many cultures, it’s simple to experiment with noodles and create new dishes that incorporate them.

This simple dessert originated in the middle-east and is a favorite there. Noon Nokhodchis are cookies made from chickpea flour and flavored with cardamom and other spices native to the middle-east. Their clover-like shape is what makes them recognizable to those looking for them. These cookies are found in bakeries and homes all over the middle east but are simple to prepare at home. With a simple recipe, a fantastic, sweet flavor, and fun shapes to eat them in, Noon Nokhodchi is sure to treat the taste buds of those who enjoy them.

Nopals are one of Mexico’s most ancient foods. Nopals are the cactus plant’s leaves and appear in many dishes throughout Mexico, including tacos and salads. Outside of Mexico, the Nopal plant is available for purchase in the southwestern United States and is easiest to find in Texas. Northern parts of Guatemala also sell nopals due to them being close to Mexico. Due to these restricted areas, it isn’t easy to find nopals in other parts of the world without custom ordering them. The taste of nopal is similar to other green vegetables like asparagus, green beans, and okra, but the texture is similar to bell peppers.

Nori is an iconic ingredient in Japanese cuisine. Nori is dried seaweed with a crunchy and salty taste and is most recognizable in sushi rolls and certain forms of nigiri sushi. Outside of sushi, Nori is one of the primary ingredients in onigiri or Japanese rice balls. It is also used as a garnish for rice or soup dishes. Nori is beloved in Japan for bringing out the savory flavor of many dishes. Nori chips are typical snack foods in Japanese supermarkets and convenience stores. Outside of Japan, Nori is used in Japanese restaurants and sold in Asian markets.

The nungu fruit, or ice apple, is a favorite among many in India. It has the consistency of lychee fruit but the flavor of coconuts. Nungu fruits have a high water content, too, making them perfect for those looking to beat the heat and hydrate in the summer months. While not always available in supermarket produce sections, you can find it in farmer’s markets or fruit import companies. The nungu fruit is enjoyed fresh, in salads, fruit desserts, and smoothies. The high water content makes it great for juicing, too. Nungu fruit has medicinal practices in India as a treatment for digestive issues and irregularity.

The letter “N” represents many of the most incredible foods our world has to offer. While this article is by no means a definitive list of foods that begin with “N,” it does serve as an introduction to many of the exotic, iconic, and forgotten foods available to eat today. The adventurous eater may travel or learn new recipes to enjoy the foods featured on this list, adding to the excitement of discovering the world of new flavors.